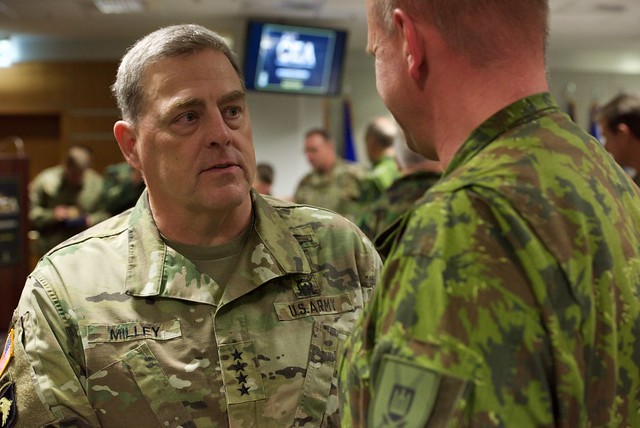 This coming October General Mark A. Milley, the current Chief of Staff of the US Army will replace General Joseph Dunford as the Chairman of the Joint Chiefs of Staff, the nation’s highest military position. General Milley (61) is a career soldier with a distinguished record both academically and militarily. A graduate of Princeton University with a Master of Arts degree from Columbia University, General Milley has also attended the United States Naval War College.

For now, it seems that the general has good chemistry with his boss, Donald Trump. During his confirmation hearing, Milley was questioned whether he could stand up to Donald Trump and tell him the truth regardless of the consequences.

When pressed at his confirmation hearing Milley replied:

“We know what this is about, and we are not going to be intimidated into making stupid decisions,” “We will give our best military advice, regardless of the consequences to ourselves.”  (Reported in Breaking Defense 11 July 2019)

At a recent event sponsored by The Atlantic Council General Milley gave his views on the future of military conflict as it relates to the US and the US Army. One point that he made in this and other recent speeches is the changes in military technology at present that will have big effects in the next conflict. He explained how after the Civil War and First World War developing technologies were emerging but missed by many decision makers. This change in military technology and the rise of urbanization will clearly create a different climate for the future of warfare.

General Milley said that the future of warfare looks to be primarily urban warfare fought in mega-cities. He says gone will be the day of the long supply tail: Troops will have to fight in a harsh environment and move frequently (even hourly) to avoid extinction. Such a battlefield that he describes will have few, if any, amenities, and it will be up the Army to train its people to be more Spartan.

On this battlefield of the future groups will be small and separated, and it is essential for junior leaders to take the initiative and lead. Junior leaders must not only follow orders, but also must question orders, and at times disobey sensibly.

As for China, Milley says that China is not an enemy but rather an adversary. He added that the US wants peace rather than war. He also has said that China studied US campaigns in the Gulf Wars and learned from them.

In an ever-changing world it is good to have someone as experienced and stable giving life or death advice on military matters to Donald Trump.