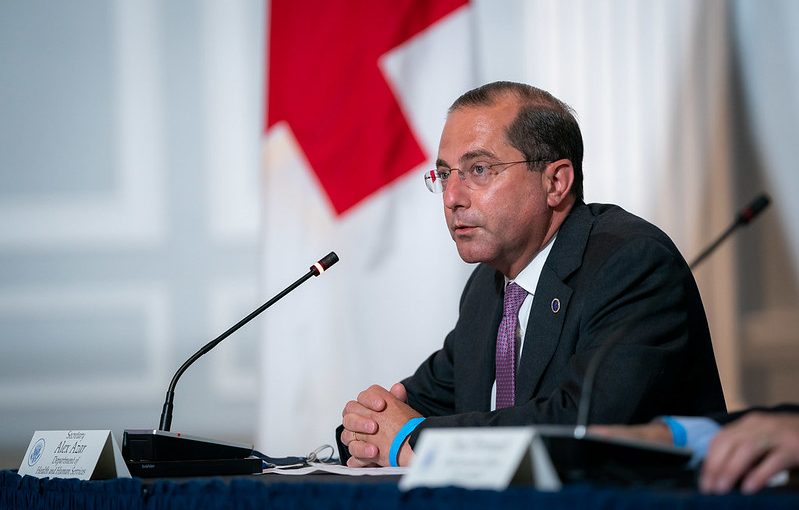 The following exchange took place at the regular briefing by the Ministry of Foreign Affairs of the People’s Republic of China in Beijing on August 10, 2020:

Shenzhen TV: Alex Azar, the United States Health and Human Services Secretary, arrived in Taiwan and kicked off his visit yesterday. He met with Tsai Ing-wen this morning and plans to meet more officials. What is your comment?

Zhao Lijian: China consistently and firmly opposes any official interactions between the US and Taiwan and has made stern representations with the US side over this issue.

I’d like to reiterate that for the China-US relationship, the Taiwan question is one of the utmost importance with the highest level of sensitivity, and the one-China principle is its political foundation. What the US has done contravened its own promises on the question. We urge the US to adhere to the one-China principle and the three joint communiques, stop having official interactions of any kind with Taiwan, make no attempts to change the nature of its relationship with Taiwan, and handle Taiwan-related issues prudently and properly to avoid severe damage to China-US relations and peace and stability across the Taiwan Strait.

What occasioned spokesperson Zhao’s sharp response was the 3-day visit by US Health and Human Services Secretary Alex Azar to the Island of Taiwan from August 9-12, 2020? At the time, Azar’s was the most senior US official to Taiwan since the US formally recognized the People’s Republic in 1979. (Azar’s visit has since been topped by the September 2020 visit of Keith Krach, US Undersecretary of State to attend the memorial service for Taiwanese leader Lee Teng-hui.)

On his visit Azar praised Taiwan’s admirable COVID response. The US has been supporting Taiwan’s bid to be allowed to have access to the World Health Organization, specifically the World Health Assembly. These moves have been vetoed by the PRC.

In his response in the August 10th press conference, Spokesman Zhao noted: “What the US has done contravened its own promises on the question.” And “the question” is the one-China principle which was agreed to in 1979 when the PRC was recognized by the US.

What has been noted here numerous times is that from the Chinese position the United States is, in effect, walking back its promises regarding the one-China principle and turning back the clock of recognition of the PRC.

The Trump administration passed the Taiwan Travel Act in 2018 which encouraged the visits of high-ranking officials from the US and Taiwan. Mr. Azar’s visit (followed by Mr. Krach’s visit) is clearly in line with the spirit and intent of this legislation. Add to this the rebuilding of the American Institute in Taiwan, which looks more  like an embassy than a simple representative office, and China’s uneasiness and annoyance can be understood.

Recently, around the issue of Taiwan there has bee a lot of chatter in the press about ending “strategic ambiguity.” This refers the US position laid out in the 1979 Taiwan Relations Act that says the US has an interest in a peaceful Taiwan Straits and does not condone the use of force in changing the political reality of the Taiwan situation. What the act does NOT say is whether the US will come to the aid of Taiwan if fighting breaks out between Taiwan and the PRC.

The US and Taiwan had a mutual defense treaty, but that treaty was abrogated in1980. The US has no treaty obligation to defend the island. Those who call for the end to strategic ambiguity argue that now is the time for the US to clearly say that it will come to Taiwan’s aid.

The Trump administration by its increased and aggressive support of Taiwan is constantly raising tensions and pushing the situation toward the anti-independence red line laid down by the PRC.

Some elements in Taiwan must feel very good indeed that their “big brother” in America is watching over them. But the Taiwanese must ask themselves if America is willing to enter into a war with the PRC over their interests. History shows that once before the US decided its own best interests and those of Taiwan were not in alignment and recognized the PRC.

Americans too, must ask themselves if Taiwan is worth going to war over–a war that will wreak havoc on the international system of trade, diplomacy, and peace for decades and cost million of lives and trillions of dollars.

What are your though on this matter? Please let us know.