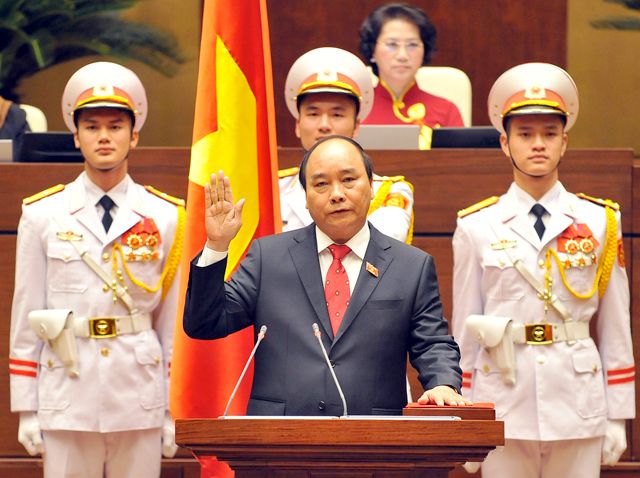 On April 7, 2016 Mr. Nguyen Xuan Phuc, 61, was sworn in as Vietnam’s first new prime minister in 10 years. Phuc’s predecessor, Mr. Nguyen Tan Dung had held the post for two 5-year terms. Prime Minister Phuc, a former deputy prime minister became a politburo member in 2011. The country faces several challenges in the near future including relations with China and the economy. Vietnam signed the Trans Pacific Partnership (TPP) agreement in February 2016, and her current economic growth target is set at 7% (6.7% last year).

Prime Minister Phuc made a short inaugural speech. The English text is below. (With link to PM Vietnam website).

Once again, I would like to extend my sincere thanks to the National Assembly for electing me as Prime Minister. This is my great honor and huge responsibility delegated by the Party, the State and the people.

I will exert all possible efforts to serve the Fatherland and the people for the ultimate goal of building the Socialist Republic of Viet Nam with rich people, and strong, democratic, equitable and civilized country.

As the head of the highest State administrative agency, which exercises the executive power and is the executive body of the National Assembly, the whole Cabinet members and I will try our best to build a strong, united, unanimous, effective and efficient Government with drastic activities; wholeheartedly serve the people with all our might; successfully fulfill the functions and tasks as prescribed by the Constitution and law under the leadership of the Party, the supervision, cooperation and support of the National Assembly, the State President, the Viet Nam Fatherland Front, and the whole people.

The Government and the Prime Minister will continue to uphold the fine traditions and achievements gained by the previous Government tenures, seriously be attentive to the comments and aspirations of the compatriots and voters nationwide, strain every nerve to overcome shortcomings and weaknesses; strive for successfully realizing socio-economic development targets and tasks; comprehensively accelerate innovation and international integration; focus on administrative reform, create a more favorable investment and business environment; promote democracy; strengthen disciplines in the State administrative apparatus and the whole society as well; improve the effectiveness of combating wastefulness and corruption; resolutely and perseveringly struggle to firmly safeguard independence, sovereignty, unity and territorial integrity; take care for the material and spiritual life and ensure people enjoy a full, happy and safe life.

I have the honor to thank Prime Minister Nguyen Tan Dung and former Prime Ministers for their great contributions to the revolutionary cause of the Party and the nation.

With my sincere sentiments, I would like to offer a bouquet to Mr. Nguyen Tan Dung, wishing him good health and further contributions to the nation.