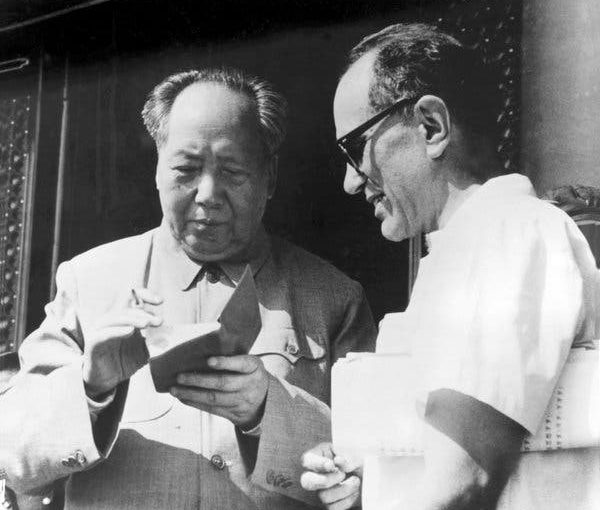 On August 24, 2019, Sidney Rittenberg, one of the last of a generation of foreigners involved in the birth or the People’s Republic of China passed away at age 98. That generation included Dr. George Hatem, Edgar Snow, Anna Louise Strong, Agnes Smedley, Rewi Alley, and Dr. Norman Bethune among others. Of this group, it was only Sidney Rittenberg who became well known for his life after October 1, 1949.

Mr. Rittenberg grew up in Charleston, South Carolinian and attended the University of North Carolina where he majored in Philosophy. During this time Mr. Rittenberg became a member of the American Communist Party. During WWII he was sent to Stanford University for language study where he mastered Chinese. He served in the US Army in China during the war, and after his discharge worked for the United Nations, and then eventually made his way to Yan’an where he met Mao Zedong and Zhou Enlai. In 1946 Mr. Rittenberg became a member of the Chinese Communist Party.

During his time in China Rittenberg was imprisoned for 15 years, much of it in solitary confinement. His first imprisonment was from 1949 to 1955, allegedly at the order of Joseph Stalin himself who claimed that Rittenberg was a member of an international spy organization. One out of jail he went back to work as a foreign advisor working for the Chinese government.

Sidney Rittenberg immersed himself in the Cultural Revolution; he became a radical and participated in the factional denunciation of others. However, he himself was caught in the net of the Cultural Revolution, being denounced by no one less than Jiang Qing, wife to Mao Zedong. He was imprisoned for another 9 years, and upon his release, in 1980 returned to the US. He said that he held Joseph Stalin and Jiang Qing responsible for his life behind bars and not the Chinese people.

On his return to the US he found a teaching position at Pacific Lutheran University and established a consulting company, Rittenberg & Associates to capitalize on his Chinese connections created over half a century.

Mr. Rittenberg’s death really closes a tumultuous chapter of Chinese history that set the stage for the birth of China as a world superpower. This new China faces 21st century challenges no less difficult than those witnessed by Sidney Rittenberg and his generation of foreign observers and participants.

October 1, 2019 marked exactly 70 years since the late Mao Zedong stood atop the gate at Beijing’s Tiananmen Square and declared that the Chinese people had stood up, and henceforth China would be the People’s Republic of China.

The 70 year period was not without its challenges including armed clashed with three other world powers, the US, India and Russia and the growing, flowering, decline and growing again of one of the world’s biggest economies. Add to this the tumult brought about by the Great Proletarian Cultural Revolution which was aimed at revitalizing the revolution and keeping ideology pure, but which resulted in the death of countless citizens and the doling out of large doses of misery to millions of others.

With Reform and Opening up in the early 1980s the pent up energy of the Chinese people was released and the world saw a real miracle as so many in the new China were lifted out of poverty as the economy showed almost unstoppable growth. China rose to be the #2 economy in the world defying all odds.

While economic growth has slowed, China is now set on a course to become a “moderately prosperous society” by the middle of this century. This vision, combined with the establishment of the Belt and Road initiative to revitalize the Silk Road are both visions of China’s future set forth by its president, Xi Jinping.

China is not without its problems going forward however. The ongoing trade war with the United States is one major headache. The Uighur minority in Xinjiang is another matter that must be addressed with wisdom and fairness. And now Hong Kong seems a problem with no easy solution that must be addressed in a creative way to ensure democracy and guarantee the rule of law. China’s claim to the South China Sea and its relations with Taiwan are also thorny issues going forward.

So what will the future be for China? A “moderately prosperous” society for the majority of its people as President Xi Jinping suggests, Or a rethinking of the China Dream in light of 21st century realities?

Please log in and give us your thoughts on this.