“Let me emphasize to you today the United States does not seek to contain China. We welcome the emergence of a peaceful, stable, prosperous China that contributes to the stability and the development of the region…”(Sec. John Kerry) 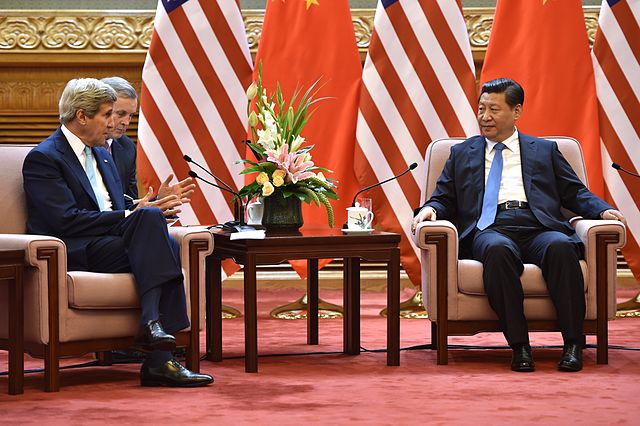 Secretary of State John Kerry went to China last week with a high level delegation to attend a series of meetings with Chinese counterparts. Some reports suggested modest success in the meetings. The two countries discussed climate change, nuclear non-proliferation and North Korea and Iran’s nuclear programs as well as cooperation on fighting terrorism. Areas of difference remain centered on alleged cyber attacks on U.S. officials and ongoing territorial issues. Kerry went out of his way to stress that the U.S. does not seek to contain China, but rather welcomes China’s emergence, and the continuation of good relations that began with a handshake 35 years ago.

In his remarks at the opening of the Sixth Round of the U.S.- China Strategic and Economic dialogue, Secretary also said:

I am particularly pleased to be here with my co-chair, the Secretary of the Treasury, Jack Lew; with Federal Reserve Chair Janet Yellen; with our Secretary of Commerce, Penny Pritzker; with the Secretary of Energy, Ernie Moniz; with our Trade Representative, Mike Froman. As I look down the line with many other members of government, the top advisors (inaudible) my deputy, (inaudible) Deputy Secretary of State William Burns — in fact, as I looked at the (inaudible) of people from the American delegation here, it is obvious to me that not a lot is getting done back in Washington today. It is being done here.

By the time Kerry and his delegation left, meetings had been held, topics discussed, and agreements made. Reports mentioned no big breakthroughs. But what was Kerry’s message? What did the composition of the Kerry delegation ( containing some of the administration’s top appointees) say to the Chinese without words? It said we value you, we respect you, we are sending some of our highest officials to the Middle Kingdom. Our relationship is not just important, it is vital. The U.S. and the Obama administration showed respect to China. They were not speaking Mandarin, but they were speaking the language of the Chinese.

Comments? Log in and let us know what you think.