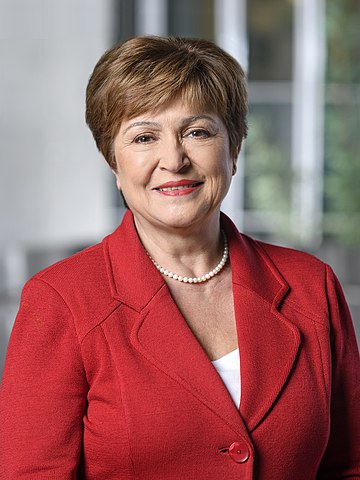 On October 1, 2019 Bulgarian economist Kristalina Georgieva took over from Christine Lagarde as Managing Director of the International Monetary Fund (IMF).  For Georgieva, it was more of a lateral move from one top job to another; she had been CEO the World Bank since January 2017, so the new position was more of a change of focus than something totally new.

Georgieva, who is fluent in Bulgarian, English, and Russian, is a career bureaucrat with an MA in Political Economy, and PhD in Economics and the other of more than 100 academic papers. Her first major job was as European Commissioner for Humanitarian Aid and Crisis Management. Notable achievements were Georgieva’s work in 2010 with the Haiti Earthquake, the Chile Earthquake, and the Pakistan Flood. In 2014 she became Vice President of the European Commission, and this followed with the World Bank position.

Kristalina Georgieva is a strong supporter and promoter of gender equality in the workplace, particularly in the boardroom. When at the World Bank she set and achieved gender parity at the top level. On October 16, Reuters quoted her as saying “Buckle Up!” The meaning is that it will be a bumpy or accelerated transition at the IMF, or that there will be exciting times ahead.

Pasted below is her first speech at the IMF where MD Georgieva lays out her plans and vision and understanding of the work of the IMF at present and in the years to come. One thing seems clear about the new head of the IMF­–the words “status quo” are not in her dictionary.

It is a great honor to address you for the first time as Managing Director of the IMF—and even more so in the presence of James Wolfensohn, who placed the fight against poverty at the heart of the World Bank.

I am very fortunate to take over from a remarkable woman, whose vision and dedication have made the IMF stronger, more innovative, and more relevant. Thank you, Christine!

And most sincere thanks to David Lipton, who has so ably led the Fund in this interim period.

I am delighted to share the stage with Aiyaz Sayed-Khaiyum, the Chair of the Board of Governors; and David Malpass, the President of the World Bank Group. It is a privilege to join you in serving our members.

Let me begin by quoting John Maynard Keynes, one of our founding fathers, who once said:

“Economics is essentially a moral science and not a natural science. That is to say, it employs introspection and judgments of value.”

These words speak to the purpose of the IMF and its staff.

For all their methodical work, Fund staff are guided by their commitment to improving people’s lives. They are not just employing judgements of value; they are seeking to add real value.

In everything we do, we aim to make a clear connection between our work and the benefits it brings for the economies and people of our member countries.

I have seen this first-hand when the IMF supported my own country, Bulgaria, in its economic transformation—from crisis, to recovery, to more jobs and higher living standards.

I have seen time and again how ordinary people benefit when transitions are well managed, when the IMF is playing its essential role in promoting sound policies for inclusive and sustainable growth.

And I am mindful of the responsibility that comes with my position—especially at a time of accelerating change in technology, climate, and the nature of work, to name just a few.

Change creates huge new opportunities but also risks that we all must navigate.

In this environment, I think of the Fund as being an important “transmission line”—of knowledge, financial resources, good policies, and capacity development. A wealth of experiences and tools that help countries embrace the benefits of change and reduce the risk of falling behind.

Being able to transmit the right signals is always important, but even more so when the world economy faces headwinds. Indeed, after a synchronized upswing, we are now facing a synchronized slowdown.

A deceleration in nearly 90 percent of the world [i] means that growth this year is expected to reach only 3 percent [ii] —its lowest rate since the beginning of the decade.

Yes, the global economy is still growing—but too slowly.

This is partly because trade tensions are now taking a toll on business confidence and investment. Add to this increased uncertainty—from Brexit to geopolitical tensions—and a further drag on growth from demographic pressures and record-high debt levels.

This all spells a troubling medium-term outlook, especially in countries already facing difficulties, including some of the Fund’s program countries.

We estimate that 45 developing countries, a total of nearly 1 billion people, will grow more slowly in per capita terms than the advanced world. [iii] Instead of catching up, those countries are set to fall further behind.

To meet this challenge, we need to step up cooperation within and across borders.

What does that mean?

It means that countries must work together to find a lasting solution on trade and keep tensions from spilling over into other critical areas, such as currencies and technology.

We need to move from trade truce to trade peace.

Here, the recent announcement by the United States and China is a step in the right direction. The goal should be to build a better trade system—one that is fairer, more innovative, and more inclusive.

It also means building consensus at home to ensure that a more balanced approach is taken to support growth.

Slower growth requires that monetary policy remain supportive. But we all recognize that it cannot do the job alone. Where space is available, fiscal policymust play a more active role.

Above all, countries need to be committed to structural reforms that can boost productivity and resilience.

Structural reforms are never easy to do. They sometimes involve taking on entrenched vested interests. And they require paying careful attention to the impact on vulnerable groups.

But they are critical to avoid getting stuck in mediocre growth—and to promote productivity, job creation, and higher incomes.

How can the IMF best support you in these efforts?

3. Strengthening the connection between policies and people

By further strengthening the connection between policies and people’s lives. By delivering results for you.

One is to focus on economic fundamentals. For Fund staff, that is always the starting point. Always recognizing that sound economic policies are not an end in themselves—but rather a means to build more prosperous societies.

I have personally witnessed the power of good policies and the impact of bad policies. During Bulgaria’s currency crisis in the 1990s, my mother lost 98 percentof her life savings to hyperinflation.

That is something I always remember when I look at economic reform programs.

A good example is Jamaica, where two IMF-supported programs have delivered tangible results: a reduction in public debt by 50 percent of GDP, historically low unemployment, and inflation stability.

And I want to congratulate the Jamaican government for being very creative in bringing society on board—using reggae music to communicate the benefits of low inflation.

This focus on results has been driving the ongoing progress in the Fund’s approach: improving the design of our lending programs, including expanding support for low-income countries at zero interest; upgrading our surveillance to enhance traction; and further integrating our capacity development with our surveillance and lending.

Given the precarious outlook, we must go further.

This means even more focus on countries that would be affected most in a downturn—fragile states, for example; and using our tools even more effectively, including precautionary instruments.

Above all, it means making our efforts even more attuned to individual country circumstances. In this way, we can deliver even better service to you.

The second priority is to focus on what matters most to people in their daily lives.

Better jobs with higher wages, greater access to finance, and more opportunities for women and young people: these are all areas where we need more potent reforms and more public and private investment.

This will help countries to make their economies both more competitive and more inclusive. The goal is to unlock the full potential of human capital in all countries.

In other words, if you want to be wealthy tomorrow, invest in your people today.

It is appropriate, therefore, that the Fund has significantly stepped up its engagement on social spending issues.

And in many countries, helping to boost public revenue—which is essential for progress on the Sustainable Development Goals.

We will maintain this momentum and continue to build on the Fund’s strengths. Our global membership gives us a unique cross-country perspective; and a unique perspective over time—75 years of experience, which we are marking this year.

History also teaches us that our success depends on strong partnerships, including with other international organizations like the World Bank.

Think about what our joint efforts have already achieved: from debt relief in low-income countries, to financial stability assessments across a broad range of countries, to effective engagement on fintech and its implications for all countries.

I commit to work with David Malpass to further expand our collaboration in key macro-critical areas, as well as on the ground in program countries.

This brings me to the third priority— reinvigorating international cooperation.

I have always admired the IMF’s commitment to building bridges between nations. Even as some countries become more reluctant to reach out across borders, the global economy becomes increasingly intertwined.

So many issues can only be effectively addressed by working together. Action on climate is one of them. Here I am greatly encouraged to see the IMF’s continuing work on mitigation and adaptation, especially on carbon pricing and building resilience.

The same goes for corporate taxation, financial regulation, and fighting money laundering and the financing of terrorism.

In this moment of heightened uncertainty, we also need a strong global financial safety net, with a well-resourced IMF at its center.

Safeguarding the IMF’s financial strength is a top priority—combined with continued efforts to ensure that the IMF’s governance becomes ever more reflective of its dynamic membership.

On this critical point, I am pleased to inform you that earlier this morning the IMFC endorsed a package—to ensure that the Fund will continue to have sufficient resources to provide full confidence that it can adequately support our membership and that quota and governance reforms will continue under the 16thGeneral Review.

A properly resourced, properly representative Fund will be even more effective in addressing your needs.

Being more effective also means continuing to learn from experience and—at the same time—continuing to modernize the Fund: streamlining our systems, leveraging new technology, and further increasing the diversity of our staff—the IMF’s greatest asset. Your greatest asset.

I want to thank them profoundly for their tireless efforts on your behalf.

I also want to thank my Management team and our Executive Directors. Thank you for placing your trust in me.

Serving our 189 member countries—large and small, rich and poor—is the greatest honor of my life.

As someone who grew up behind the Iron Curtain, I could never have expected to lead the IMF. That experience holds a simple lesson:

Nothing is impossible. Change is unstoppable. We can build a better world.