This week we celebrate the 43rd anniversary of “the week that changed the world.” After much diplomatic back and forth with secret meetings and negotiations, U.S. President Richard M. Nixon, his wife Pat Nixon, U.S. Secretary of State William Rodgers, National Security Advisor Henry Kissinger and accompanying staff landed in Beijing on February 21, 1973. Films show President Nixon striding up to Premier Zhou Enlai and extending his hand in friendship. A delegation of Chinese officials and an honor guard were on hand to meet him, a band played the national anthems of both countries, and the U.S. party was whisked away to their guest quarters on a cold and sunny early spring day. 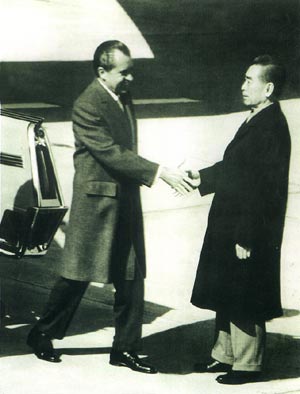 Premier Zhou Enlai accompanied the Americans to their quarters and took his leave. Then the unexpected happened. In a short time, Zhou was back and had a message for Dr. Kissinger: Chairman Mao Zedong would see the President-now. No meeting had been scheduled with the ailing Chairman, and there was no telling when another opportunity would arise. President Nixon and his advisors hastened to Mao’s villa where a meeting was held in his library/study.

The conversation was recorded for the American side by Winston Lord, assistant to Dr. Kissinger. (A link to the transcript at the Nixon library is posted below.) The meeting is described by Dr. Kissinger in his book, On China, and by Mr. Lord in an article on the website of the Association for Diplomatic Studies and Training,( also linked below.) Lord’s transcript is invaluable: although we can read his reminiscences as well as Dr. Kissinger’s, the transcript lets us become a “virtual participant” at this world-changing meeting.

Dr. Kissinger and others describe Chairman Mao as a philosopher maintaining the high ground. (And the word is used a lot in the transcript.) You could also see him as a Tai Chi player; he feints, he flows, he retreats, and he off-balances his opponent. President Nixon is more of a tough middleweight boxer; he has his chin down, elbows close to the ribs, guard up ready to punch, but Mao is nowhere to be found. The President says: “The Chairman’s moved a nation and changed the world.” The Chairman replies famously: ” I haven’t been able to change it. I’ve only been able to change a few places in the vicinity of Peking.”  Nixon lays out substantive issues, and Mao feints and says we will leave that to these people, meaning Kissinger and Zhou. Nixon thinks its time for somkin’ and jokin’ and Mao lays Lin Biao and the Russians on him. It is pretty much Chairman Mao’s show from beginning to end. The Good Old Boy from Hunan VS the Earnest Quaker from Yorba Linda. It’s no match.

While this might be an amusing metaphor regarding the dynamics of the meeting, in the short and long run both parties came away from the meeting winners. Chairman Mao had publicly given his blessing to the President’s visit, and this meeting was widely reported by the Chinese and U.S. media. It was a bold step for both leaders, and both knew there were elements in their countries who were against it.

What followed days later was the Shanghai Communique, then  later the re-establishment of US-China relations, and finally the re-emergence of China during the Deng years. Indeed, President Nixon’s trip to China is an event worth celebrating and remembering, even 43 years later.

Transcript of The Meeting  (Nixon Library):