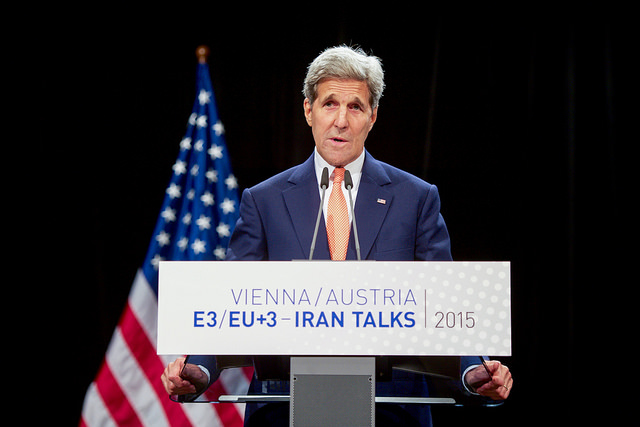 The above photo shows then Secretary of State John Kerry addressing reporters on July 14, 2015 in Vienna and announcing that, after years of arduous negotiations, an agreement had been reached between the West and Iran over Iran’s nuclear program. This agreement officially knows as the Joint Comprehensive Plan of Action (JCPOA) has since become to be known as “the Iran nuclear deal.”

Certification for the JCPOA is due on May 12, 2018, and Donald Trump may decide to pull the U.S. out of the deal. Trump has been attacking the agreement since he was running for the presidency in 2015. In his typical “you wait and see” manner he has not said clearly what he will do, but all signs and hints indicate that he will not certify the agreement this time.

Trump has his allies on this including his Secretary of State Mike Pompeo, National Security Advisor John Bolton and Israel’s Prime Minister Benjamin Netanyahu. The shared narrative is that this is a bad deal, and that it must be fixed or re-negotiated and several unrelated issues (such as Iran’s missile program and Iran’s behavior in its region and in Syria) must be added on to the agreement. One more “requirement” to a new deal would be the inspection of Iran’s military bases.

Iran’s answer to this call for re-negotiation is a firm and unequivocal “no.” In an interview with US network NPR, on April 24, 2018 Iran’s Foreign Minister Mohammad Javad Zarif said:

“I believe Europe has said that they are not prepared to renegotiate this agreement and I think it’s very prudent, because anybody who participated in the negotiation of this deal would tell you that opening this package would be tantamount to opening a Pandora’s box, and we’ll never be able to close it.”

The question now is whether there is any “plan B” possible or available to the parties to the agreement. The “Europeans” mean France, Germany, Great Britain, and the EU. Other parties are China, Russia, Iran, and the USA. If the US pulls out of the agreement where does that leave everyone else? There seem to be a couple possible scenarios.

1) The Europeans and Russia and China continue to move forward without the US and the JCPOA continues without the US. Pulling out of the deal would mean that the US would re-impose sanctions in order to get Iran to the table regarding its missile program and its support of its clients in Yemen and Syria. It is doubtful that Iran would be in any mood to negotiate these issues or to change its position in any way.

2) Iran could pull out of the deal completely. No compromise with the Russians, Chinese or Europeans. A unilateral (actually bi-lateral) withdrawal. And while Iran has repeatedly stated that it has no intention to build nuclear weapons, this might just push them over the edge. They might find themselves in the same mental space as the North Koreans: surrounded by enemies intent on destroying them, the only answer is to produce and maintain nuclear weapons.

In either of these two scenarios, the Trump-Israel-Saudi coalition might just decide to act preemptively by attacking Iran to effect regime change. They might start by bombing or attacking Iran’s nuclear sites to “prevent” Iran from getting a bomb to put on their missiles. This would inflame the Middle East, lead to war, and have a massive negative effect on the world economy.

Whatever happens regarding the May 12 certification will not be good. The best case scenario would be for the US to sign on again for another period, but this is not likely to happen as Trump has staked his credibility with his followers on either getting what he wants (impossible) or pulling the US out of the agreement.

A cynic might say that since Trump won’t get his war in Korea, he will have to settle for Iran. Let us hope that such is not the case.