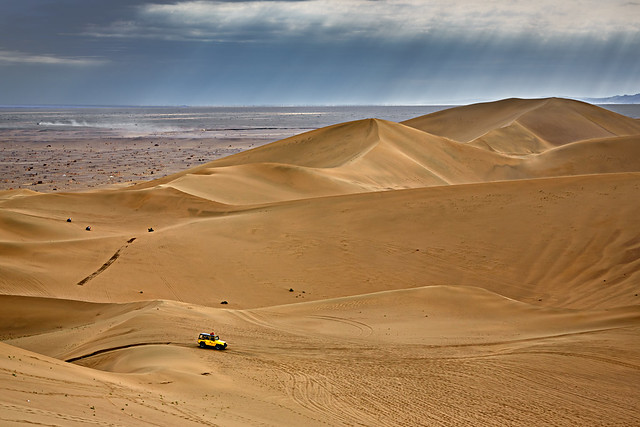 1: not showing hospitality : not friendly or receptive

2: providing no shelter or sustenance an inhospitable environment 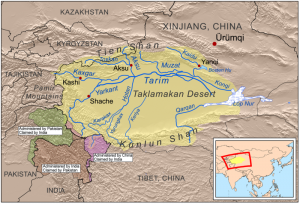 The Taklamakan, which occupies 330,000km2 in China’s westernmost Xinjiang Uighur region, has an annual rainfall from 38-10mm, and temperatures that range from 400C to -200C. The topography consists of constantly-shifting sand dunes that can range from a height of around 240m to around 500m.

Wildlife, such as it is, consists of Camels, wild asses, foxes, wolves and gazelle. The peoples of the area are Uighurs of Turkic origin and Han Chinese. In ancient times peoples of all ethnicities transversed the area. Between 2005-2009, archeologists excavated a desert site called Xiaohe where they found almost perfectly-preserved mummies of people of Caucasian origin from an estimated 2000 BCE.

In modern times the People’s Republic of China has built roads across the vast emptiness of the Tarim Basin and the Taklamakan, but it ancient times travelers along the Silk Road avoided a direct crossing and skirted the desert on either a northern or southern route. A main Oasis on the fringe of the desert was Kashgar, which remains important today as a Chinese gate to Pakistan and a key station on the modern Silk Road.

From an economic standpoint, the only significant activity connected with this area is the Tarim Basin Oilfield which is rated as China’s 4th largest and covers an estimated 560,000km2. Yields of crude oil exceeding 5 million tons have been reported by PetroChina for the Tarim Oilfield. In addition, the company reports supplying 25 billion m3of natural gas annually.

Several companies offer tourists a chance to explore a part of this vast desert wilderness by road. There is only one report of a brave soul, a Korean man, who crossed the desert on foot in modern times.

Visiting the Taklamakan might not be an ideal vacation, but it would certainly be an adventure. Times change, trends come and go, but places like this (despite the shifting sands) seem to change little as the centuries go by.