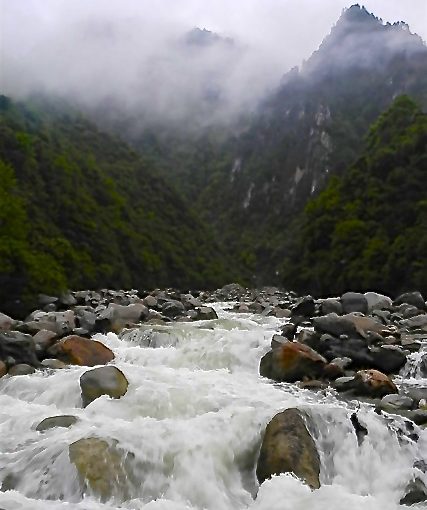 China’s Nujiang or Nu River runs a course of 3200km from the Tibet plateau through Myanmar and Thailand to eventually empty into the Andaman Sea. Once outside of China, the Nu River becomes the Salween River or Thanlwin River. The Nujiang is China’s last undammed river and one of the longest free-flowing rivers in the world, and that is its blessing and its curse. 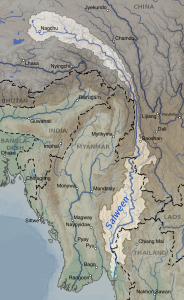 Nujiang Prefecture in China’s southwest is home to some of its poorer minorities who are isolated both physically and culturally. These are the people of the Nu minority and the Lisu minority. (Strangely, some of the Nu people were converted to Catholicism and still maintain that affiliation.) A major drawback for them is a lack of knowledge of Mandarin Chinese, the language of their central government in Beijing.

The Nu River basin is an area of immense biodiversity having an estimated 6,000 unique plant species and 47 fish and amphibian species unique to the area and 143 other species of fish and amphibians. Other wildlife includes wild Ox, small pandas, and monkeys (World Atlas). The danger to this pristine ecosystem is development–development that would bring a higher standard of living to the poor minorities but would also threaten the ecosystem of the river as it winds its way from the highlands to the sea.

A “higher standard of living” really has to do with bringing the minorities to a power grid, and that power would come from energy generated hydroelectrically. To get that kind of power dams are necessary. And just as with the Mekong River, dams bring problems of their own. The Nu River flows over several earthquake faults, and dams in these areas could cause catastrophic damage should an earthquake occur.

Moreover, damming the free-flowing river waters would also have serious side effects on the fragile ecosystem. A series of 15 dams were proposed for the Nujiang in the early 2000s, but most have been put on hold. However, China-supported dam projects in the lower Salween River in Myanmar are ongoing.

In an effort to preserve the wild Nu areas, local authorities have created two national parks: the Nujiang Gran Canyon National Park and the Dulongjiang National Park. Perhaps tourism can bring world attention to this precious resource so that it can continue to benefit the local people, the countries through which the river flows and our planet.