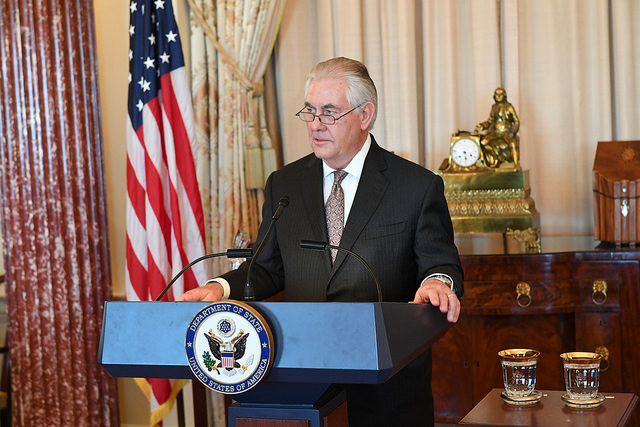 There is an old American saying, “What you see is what you get.” The saying has  two meanings: firstly, perception colors belief, and secondly, there is no mystery or hidden meaning to the topic in question. As far as Mr. Rex Wayne Tillerson, 69th Secretary of State of The United States, there seems to be no real mystery. A Republican president has appointed a no-nonsense businessman to head the State Department. Not since George P. Schultz, the Reagan-era secretary of state, has such a powerful CEO and business leader been appointed to the office.

Tillerson is the former Chairman and CEO of the energy conglomerate ExxonMobil. Sixty-five-year-old Tillerson had been with them from the start of his career in 1975. While lifetime employment seems to be a thing of the past in many industries, Tillerson was a one-company man, rising steadily to the top job.

Of particular interest these days is the Secretary’s ties with Russia. Along the way he curated the company’s Russia operations and got to know Vladimir Putin well.

It was reported that in 2014 Tillerson came out against the Russia sanctions over the annexation of Crimea for being an ineffective policy. His personal connection to Putin might have been a deciding factor in Trump’s choice of Tillerson for State, but now with all the heat on the Trump administration for real and alleged ties to the Kremlin, this connection may not shine as brightly.

What you see with Tillerson is what you get: a hard working, successful business executive (whose take-home pays was $40million) from Texas, an engineer and a pragmatist. He embraces the Christian faith, was president of the Boy Scouts of America and keeps his Texas home.

The only question really seems to be how long he will continue to function in the chaotic Trump administration. Critics have noted his absence from key meetings with foreign leaders. Some critics hold that his real loyalties are still with the corporation that he has given his life to.

Will Mr. Tillerson be able to ride out the storm that is the first 100 days of the Trump administration? Will he be able to get his department functioning like a well-oiled machine, or will he wait a decent interval to retire to Texas and plan his next move?

Please let us know what you think about this.