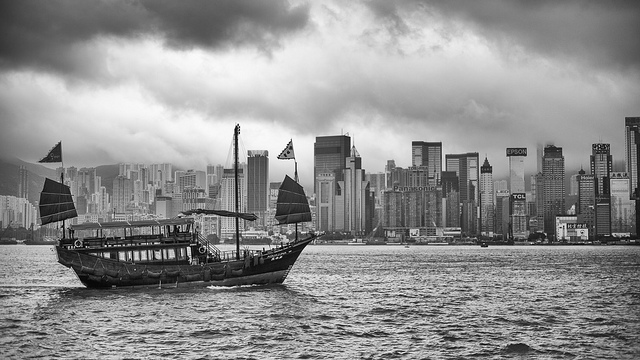 Twenty years ago on a very rainy July 1, 1997 the British Union Jack was run down the flagpole, up went the red banner of the People’s Republic and the Governor General and English prince sailed away.

Many in Hong Kong feared for the worst and left before the handover. Others established residences overseas, “just in case.” Well, the worst did not happen. It was pretty much business as usual on July 2, 1997. The “one country, two systems” model laid out by China’s government seems to have worked–if not to everyone’s satisfaction.

Things have changed in Hong Kong due to influences from without and within. Many have pointed out that Hong Kong was unique economically in 1997, and hence very valuable to the PRC. But, times have changed. China itself has risen up economically, and what was unique and valuable then is not so much so now. The rivalry from nearby Shenzhen and the growing Pearl River Delta megapolis has made Hong Kong part of the transformation but not the leader.

Citizens of Hong Kong are now burdened by a high cost of living and the ever-increasing price of housing. Economic opportunity seems less of an achievable dream as time goes by.

Politically, there is dissatisfaction with Beijing in some quarters, particularly among the young. The 2014 Umbrella Movement by young people was a manifestation of continuing unrest and dissatisfaction. In addition, many young people see themselves as Hong Kongers of Chinese ethnicity rather than Chinese. (This mirrors the situation in Taiwan where many people see themselves as Taiwanese and not Chinese.)

So, what about Beijing’s take on the situation? President Xi Jinping will visit the Hong Kong SAR from June 29 to July 1 to officiate at a number of ceremonies and to swear in Carrie Lam as the new chief executive. In addition, China’s first aircraft carrier, the Liaoning, will make a port call to “increase patriotism.”

Here we are at the bottom line. And that is? Just this: life goes on and life has gone on in Hong Kong for 20 years now. Beijing has in fact kept its promise so far and has handled the SAR in a rather deft manner. The future will bring changes, probably more organic and evolutionary than revolutionary. In 30 years, new realities will have emerged and today’s problems will be long forgotten. Congratulations Hong Kong on your “first” 20 years!