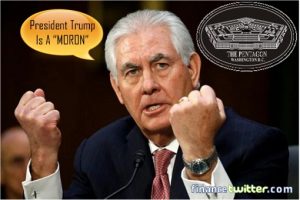 Is Donald Trump a moron? As leaders in Asia get ready to host the US president in the coming weeks, that question deserves consideration. As has been reported, Secretary of State Rex Tillerson reportedly called Trump a “moron,” officially a “fucking moron,” because he was angered that Trump had turned a speech to the Boy Scouts of America, which Tillerson was once the president of, into a political campaign speech, replete with calls to “lock her (Hillary Clinton), up.” Tillerson never actually denied using the epithet to describe Trump so we can assume the reporting is true.

Trump regularly uses the tactic of hurling charges made against him back at the parties making the charges. Accordingly, he called the executives of NBC News, which broke the story, “morons.” He of course now regularly speaks of the “fake news” put out by network and cable news companies that originally pointed out the false claims made by Trump. And now that the Mueller investigation is getting grand juries to indict Trump associates, if not Trump himself, the Donald is accusing Hillary Clinton of receiving bribes from the Russians.

Who is the big winner in all of this? Xi Jinping. As Fareed Zakaria pointed out in his latest GPS program, Xi’s rise not only in China, but in many countries around the world, is due not necessarily to the brilliance of Xi, of which there is clear evidence, but to the decline of America, embodied by its president, Donald Trump.

The answer to the question: “Is Donald Trump a moron?” Yes.