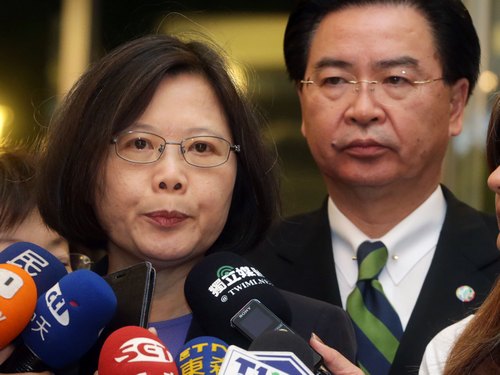 It is 2015 and a woman is running for president. Not in the US, but in Taiwan.The Democratic Progressive Party’s (DPP) Chair, Tsai Ing-wen has declared herself a candidate for president in the coming 2016 elections. This will be her second run for president. She also ran in 2012, but was defeated by Taiwan’s current president, Ma Ying-jeou.

Voters gave the DPP a resounding victory in local elections in autumn 2014, and Taiwan’s President Ma stepped down as KMT party president to take responsibility for the poor showing.

It looks like the voters will again hand the KMT a defeat, this time in the 2016 general election for President, Vice-President and Legislative Yuan. Current KMT president and mayor of New Taipei City, Eric Chu, has said that he is not going to run in 2016. If the chances of winning are as slim as they look, maybe Mr. Chu does not want to damage his political reputation by being beaten in a lopsided presidential election.

If Tsai Ing-wen does become president, and the DPP gets the landslide victory that many anticipate, then cross strait relations with the People’s Republic will take a new direction.

The Wall Street Journal reported ( April 15, 2015) that Tsai has already said relations with the PRC will remain unchanged and the status quo will be respected.

But. The DPP has made its position quite clear. In 2007 it called for a separate identity for Taiwan. What’s more, the party considers Taiwan independence a fact, and rejects the one-China principle. On its website, the DPP describes itself as favoring a “balanced international perspective” “Taiwan-centric identity” and “strong progressive values.”

Tsai’s statement favoring the status quo regarding cross strait relations may not satisfy anyone. The DPP is the DPP and Taiwan uniting with the mainland does not seem to be part of their DNA.

Could this issue be the one chance that the KMT has to narrow the odds in the 2016 election, or even win the election? Many have benefited from the warmer relations between the PRC and Taiwan during the Ma years, in a sense they have a real vested interest in their own “status quo”, that is, improved economic and social relations with the mainland.

And. Then there is the coalition of students and independent  groups that made up the Sunflower Movement of 2014 that occupied the Legislative Yuan. Their complaint was with the KMT and its cross strait trade policy, but even if the DPP wins in 2016, will the younger generation be satisfied with “business as usual” or “business as usual 1.1 DPP style”?

Finally. In the world of politics, where pragmatism often trumps principles, perhaps an “accommodation” could be reached between the PRC and DPP  favoring the status quo and business as usual.

Except. That there is a metaphorical iceberg in the Taiwan Strait, and that is Taiwan Independence. Sooner or later action must be taken to deal with the issue. And each party has a radically different solution to the problem.